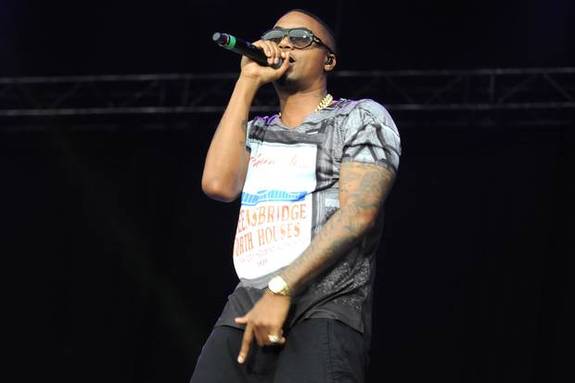 Saturday Night, Nas' European tour stopped in London for a headlining performance at the 2014 Lovebox Music Festival. Taking place on the grounds of London's Victoria Park, the festival offered fans the rare opportunity to see the hip hop legend deliver a track-by-track rendition of his classic debut album, Illmatic. Dressed in dark denim and a "Queensbridge North Houses" t-shirt, the emcee, who is celebrating the twentieth anniversary of the landmark album, took to the venue's main stage early Saturday evening. Backed by DJ Green Lantern, Nas rocked the crowd with an unforgettable performance of the classic album with tracks like "N.Y. state of Mind," "Represent," and "One Love," where the masses of the audience could be seen pointing one finger in the air while rocking out to the track. Nas continued his performance of the full album before treating the audience to other hits from his catalogue, including "One Mic," "Hate Me Now," and more.

Other artists who performed at the festival included MIA who also headlined the festival, Chase & Status, The Horrors, A$AP Rocky, Joey Bada$$, Katy B, Banks, Mount Kimbie, and more.